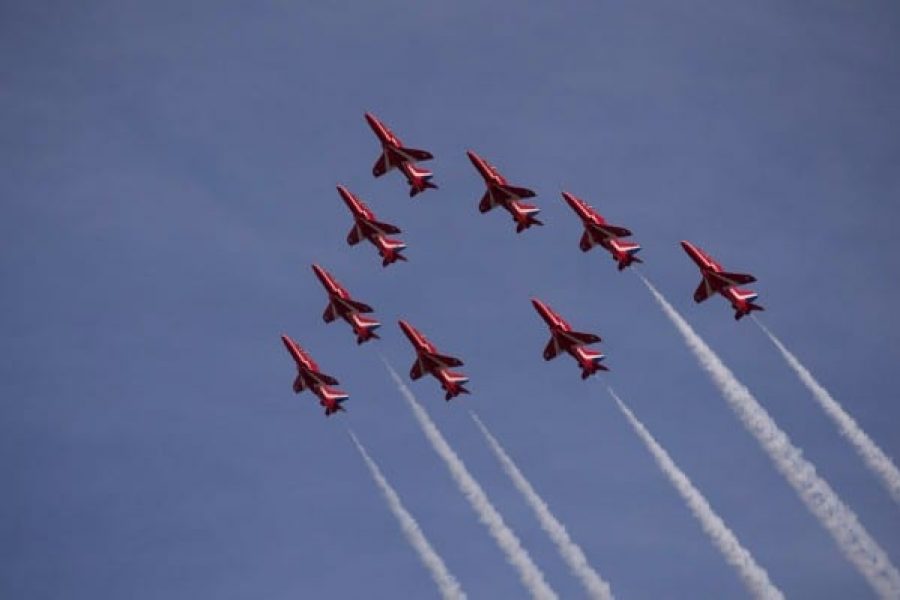 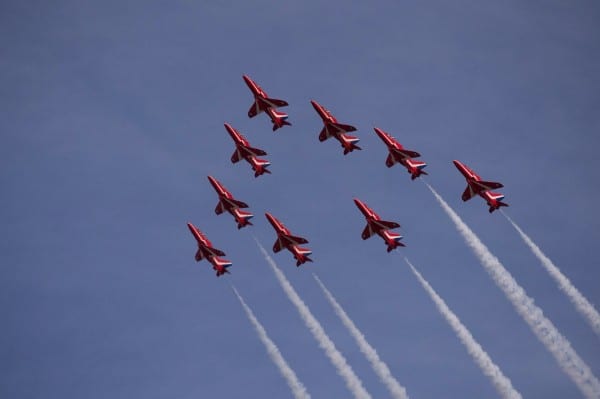 It’s a major concern that the news seems awash with dysfunctional Leadership Teams at present.

Take the team heading up the Independent Inquiry into Child Sex Abuse which has seen three leaders come and go within its first two years, suffered allegations of sexual abuse from within its own ranks and has just lost yet another senior lawyer with two more threatening to quit.

Or what about the UKIP party who lost their new leader within 3 weeks of taking office, now have Nigel Farage back as leader for a fourth stint prior to another election on the 28th November and meantime lost the favourite candidate, Steven Woolfe, through playground antics at the European Parliament which resulted in him being hospitalised and calling the party “ungovernable”.

And who knows what on earth will happen when Trump gets into the White House come January – a scary prospect if ever there was one!

So, whilst the word dysfunctional is a strong and somewhat emotive word, we certainly have plenty of examples to consider at present.

The Truth About Senior Leadership Teams

Now whilst these are extreme examples of dysfunction, the fact is that many teams are dysfunctional, especially senior ones.

Let’s be honest, Senior Management Teams and Boards are made up of functional or divisional heads sitting around a table. The reality is they are naturally siloed with their own agendas, their own performance objectives and their own turf to protect. It’s a classic battleground! Throw an inexperienced, overwhelmed or even weak leader into the mix and you’ve got the potential for open warfare.

The reality is, however, that most dysfunctional senior teams aren’t openly at war.  It’s much more insidious than that.  Typically they’re more likely to be displaying passive-aggressive behaviours e.g. silently waiting for someone to trip up, endorsing ‘bad’ behaviour by not calling it out, badmouthing people behind their backs and so on.

I’ve experienced it countless times both from within organisations and as an external Executive Coach working with businesses across numerous industry sectors.  It’s a major performance challenge.

The Five Dysfunctions of a Team (Lencioni)

In his seminal book The Five Dysfunctions of a Team, Patrick Lencioni states that what lies at the heart of dysfunctional teams is the absence of trust. 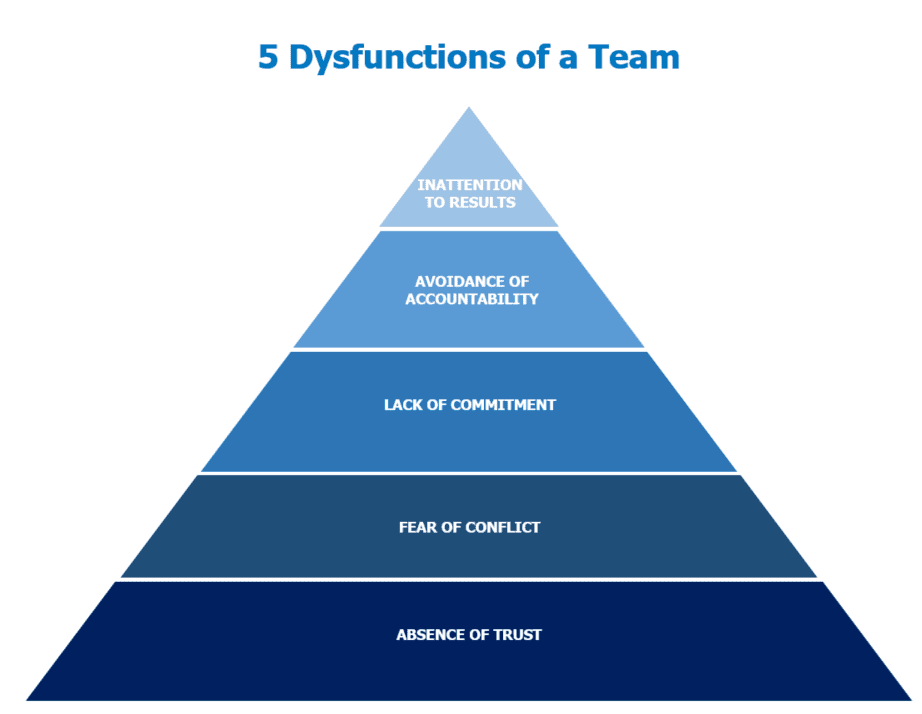 What he says is that without trust people aren’t open and honest with one another.

Without being open and honest there’s what Lencioni calls an “artificial harmony” where people don’t challenge one another due to a fear of conflict.

Without conflict or challenge there’s a lack of buy-in and hence commitment – if you can’t contribute and don’t feel your voice is being heard you soon become apathetic.

Without commitment, there’s an avoidance of accountability, both at a personal and team level.

And with no accountability we all go back to doing what’s easiest – working in our own silos again, pursuing our individual goals and personal status at the expense of the wider team and business.

Does this all sound or feel horribly familiar!?

In contrast, when there is trust he states:

“…conflict becomes nothing but the pursuit of truth, an attempt to find the best possible answer.”

The Power of Team Coaching

It’s why Team Coaching is such a powerful intervention.

✓ A safe environment where people are encouraged to be open and honest.

✓ A chance to step back and take a different view.

✓ A chance to experience the benefits of healthy conflict (i.e. debate).

✓ A chance to work closely with different people.

✓ A chance to break down silos where they exist.

✓ An independent observer/facilitator to provide feedback.

In fact all the benefits of one-to-one coaching plus a bit more besides and all multiplied by the number of people in the team!

One of the tools I find most valuable in team coaching is the Herrmann Brain Dominance Instrument® team profile. Designed in the 1970s by Ned Herrmann when he was at General Electric, it’s the world’s most popular thinking styles tool, used by over a third of the Fortune 500 Companies in the US.

In brief, it’s an online self-assessment which measures our preferences for four different thinking styles – logical, structural, interpersonal and strategic. 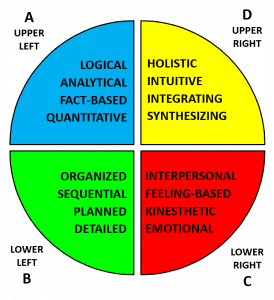 Each member of the team receives an individual profile and then the team is mapped anonymously to see how biased or otherwise it is towards certain thinking styles.

Research has shown that Whole Brain® teams are 66% more effective than teams who are not Whole Brain® and that the ideal team is made up of a team with at least one person with a strong preference in each quadrant and then a good spread across all the quadrants.

Because people with a strong preference in a certain quadrant are passionate about it.  It’s what motivates them, what they enjoy, what gets them out of bed in the morning.  They’re therefore great advocates for that way of thinking and won’t let it get bypassed or overlooked; whilst a good spread of individuals brings lots of benefits.

Benefits of a Whole Brain Team®

✓ Will reflect the business as a whole (groups of 100 or more will always be Whole-Brain® groups; sometimes it’s as low as 50).

✓ Will be able to communicate effectively with all thinking styles.

✓ Will be better able to influence key stakeholders.

✓ Will give all aspects of business equal weight.

✓ Will be able to cover off high level thinking and detail.

I could go on, but ultimately it’s about harnessing the collective intelligence of the team because as the famous leadership expert Peter Senge once said:
.

The HBDI® therefore encourages teams to play to one anothers’ strengths, to harness the amazing diversity of any team and thus to respect difference. When team members recognise that all the thinking styles are highly valuable and indeed vital for driving performance their attitudes change.  They can learn to respect and work well with people who might be very different to themselves and might even have driven them crazy in the past!

One prefers excel spreadsheets and email communication; the other prefers human interest stories and face to face dialogue. Their work styles and approach to life can seem pretty alien to one another!  Indeed working together can be a real challenge.  Yet the HBDI® shows that if they can crack their working relationship they complement each other brilliantly and make a winning team.

This evidently applies in our personal lives as well.  Interestingly, research undertaken by Herrmann International shows that most first marriages that fail are made up of couples with opposing thinking styles; most second marriages aren’t. If they couldn’t make it work first time around, they determine they can’t make it work second time around either!

There is, however, one additional challenge here. Diverse Whole Brain® teams can be challenging to manage. You need to be a strong, confident and emotionally intelligent leader who doesn’t surround him or herself with ‘mini-mes’ prone to group-think.  A leader who can manage lots of different characters and different working styles; who can manage and orchestrate healthy conflict and give appropriate feedback when there’s unhealthy conflict or inappropriate behaviour.  In fact, the ideal leader for a Whole Brain® team is a Whole Brain® leader – the leader most likely to be able to handle this level of difference and diversity well.

So there’s quite often some Leadership Coaching required too!

Thus if you want to develop high performance teams and not replicate the dysfunctional behaviour of many teams in the media spotlight right now, then as a starting point you need to create the right kind of environment.  A safe environment where people are encouraged to speak their mind without fear of reprisal; an environment where they know their opinion will be heard and valued whatever their preferred style of thinking or strengths and above all an environment where trust and respect for diversity are core values upheld by the leader and by everyone in the team.  Not an easy thing to achieve as we all know only too well but Team Coaching using the HBDI® could well be your gateway to a winning formula.

For more information on the HBDI® and Team Coaching, check out our  One Day Masterclass – Building High Performance Teams.

If anything in this article has resonated with you and you’ve found it useful please don’t hesitate to sign up for our monthly blog and/or quarterly newsletter to ensure you don’t miss out on future articles.  Simply click HERE.